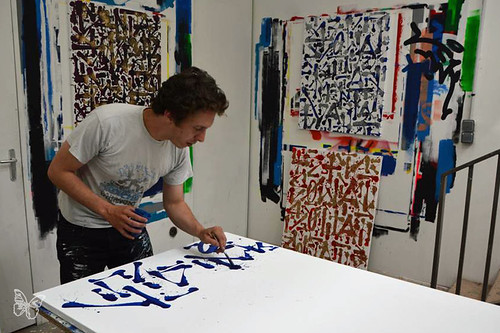 From September 2015 to August 2016, French artists Lek & Sowat were the first Graffiti writers to become artists-in-residence at the prestigious Academy of France in Rome, the Villa Médicis. A mark of recognition for this atypical duo whose path has led them from the urban wastelands of the Mausolée project (covered here) to the underground ventilation shafts of the Palais de Tokyo (see more here).

We caught up with Sowat in his Parisian studio before he left for his residency and share  some behind the scenes pictures. 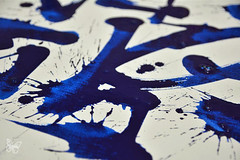 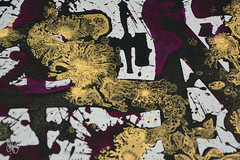 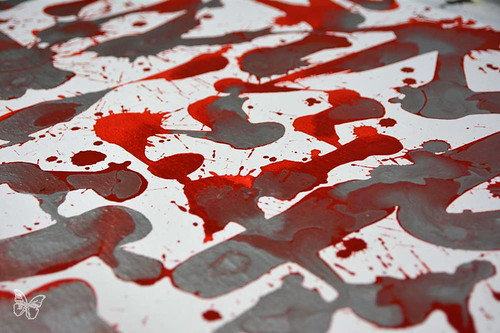 Sowat thoroughly balances geometry, abstraction and alchemy, playing with the variety of reactions allowed by mixing china ink with chemical substances.
The vibrant colours provide a highly emotional impact to the works. Carefully chosen colour combinations of Blood and Light, Blue and Steel, Purple and Gold, Coal and Fire, evoke a universe, references, an invitation to dream, and seek to revive the ancient alchemical myth of transformation. 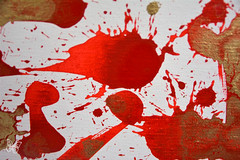 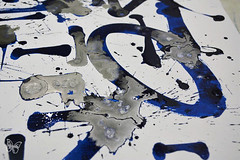 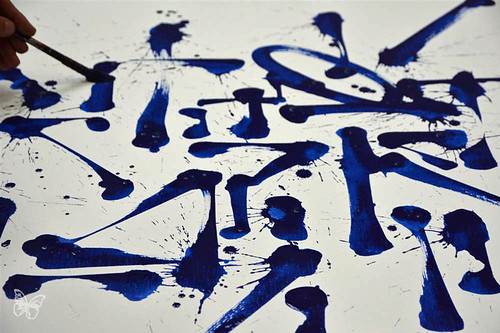 During his 12 months residency,  Sowat shared Ingres’ former studio with Lek, and created a new series of work that will be exhibited for his solo show ‘Tempus Fugit‘ at the Galerie Le Feuvre in Paris on 17 November 2016.

Thirty- nine large-sized works, scrupulously composed and staged in the gardens of the Villa explore his research into calligraphy, lines and movement, drawing as much inspiration from the engraved marble slabs of the Roman Codex as from Cholo Writing, the Latino gangs’ art from the Los Angeles of his youth, thus creating a tension between the primitive aspect of his work and the stone and plaster of antique statues.