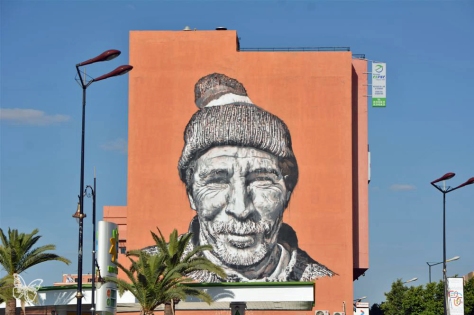 The Moroccan city of Marrakech has stood for close to a thousand years, a city of history and culture. Also known as the Red City, Marrakech is one of the most evocative places in the world,  a place to engage the senses from the vibrant colourful souks, enticing smells and spices, relaxing hammams  to the architectural wonders from exquisite gardens to ornate mosques and minarets.
So it’s no surprise that the city is becoming more and more active with the street art scene, and more and more international artists are creating public art both in the old city and the French quarter, known as Gueliz. Hidden away, down unassuming side streets and inside cafes and galleries, it’s not that easy to discover Marrakech’s emerging street art installations. So we give you some tips to discover the best public art installations in town and surrounding areas.
On the side of a building on Avenue Mohamed VI, a large portrait of Marrakchi ‘Aziz’ by Beikrich greets visitors exiting the main train station. In collaboration with the Montresso Art Foundation, German artist Hendrik Beikrich pays homage to the disappearing tradesmen in Morocco, at least in the manner that they continue to work today, including zellig artists, masons, shepherds and more.  Beikirch has a fascination for everyday people, those who are often photographed in the souks but never really honoured.
Rue des Vieux Marrakchis is host to one of the leading contemporary and urban art gallery David Bloch with immersive installations from international graffiti artists like REMED, Lek, Sowat, MIST. 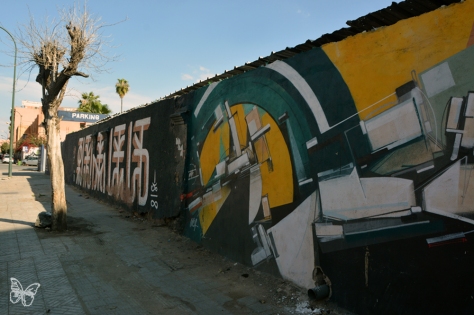 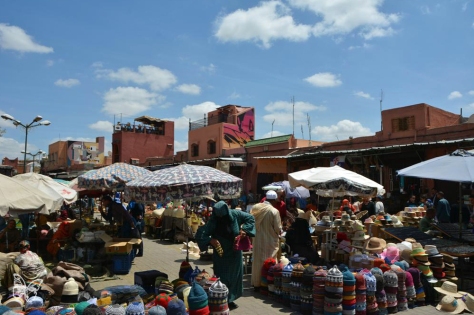 In terms of Art festivals, since its creation in 2004 the Marrakech Biennale has grown amongst the top 20 biennales in the world, and Street Art being an inherent part of the cultural programme. In the rooftops of the souks in the Medina,  Bahia Palace area, and the walls around Gueliz, the new part of Marrakech, a dozen of murals by international artists can be found wandering through the narrow colourful streets: Mad C (Germany), Dotmaster (UK), Giacomo RUN (Italy), Dag Insky (France), Kalamour (Morocco), Alexey Lucas (Russia), LX.ONE (France), Lucy McLauchlan (UK), Remi Rough (UK), Sickboy (UK) and Yesbee (UK). 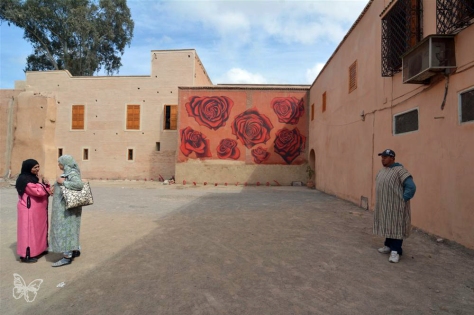 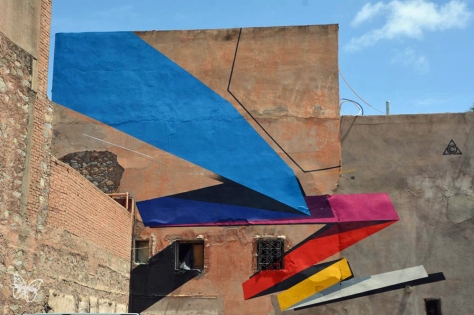 Marrakech also feature the largest mural in Morocco by French artists POES and JO BER,  a monumental 360 sqaure meters in the the college Tariq Ben Ziad, the largest mixed college with 2200 children. Both artists wanted to revisit the infamous board game “The game of Life”, designed to look like a video game. The Master of the game with robotic features invites the children through different seasons in a playful world, with joyful characters, and share a creative vision of life based on knowledge, sign of cultural openness and that the student aspirations and ambitions are supported regardless of their background or gender.

Last but not least the hidden gem of Marrakech is Jardin Rouge (from the Montresso Art Foundation), an artistic residency and private heaven for contemporary and street artists to experiment monumental works (with visits on appointment only).
All photos by Butterfly Art News