Paris is an open air museum! Looking up, we can discover amazing pieces from graffiti writing, humourous stencils , poetic collages or monumental murals. We take you through the best locations in Paris to enjoy art in the streets from the festive district of Oberkampf via the 13th arrondissement or the suburbs.

From Montmartre to Butte-aux-Cailles , you have to open your eyes because each crossing is a pretext for creation and in many places in Paris, colourful frescoes have covered  concrete walls.

In recent years, the 13th arondissement of Paris is the favourite spot for street artists and has today become a true open-air museum ! In the vicinity of the National metro station, in the rue Jeanne d’Arc and the boulevard Vincent Auriol, it is possible to observe more than thirty murals! The American artist Shepard Fairey has produced several of them, from Rise above Rebel ( which we helped organise with the Mayor of 13th District) and one bearing the French motto: ” Liberty, equality, fraternity “.

Next door, a mosaic of several meters high representing the whimsical doctor of television series Doctor House is signed by French artist Invader .  The artist also invaded the city with other 1600 mosaics, so look up when wandering around.

Throughout the neighbourhood, you only have to walk around to discover a masterpiece, from Tristan Eaton, Okuda,  Bordalo or the colossal fresco “Embrace and Struggle” depicting two men facing each other in 18th century clothes. , made by the Irish painter Conor Harrington.

East of Paris, the districts of Oberkampf , Belleville and Ménilmontant are high places of street art. Thanks to the action of associations like Le MUR , some facades even have their own artistic programming!  Every two weeks, a new artist is invited to paint at 107 rue Oberkampf (11th). The performance takes place during the day and in public, a real treat for the eyes! 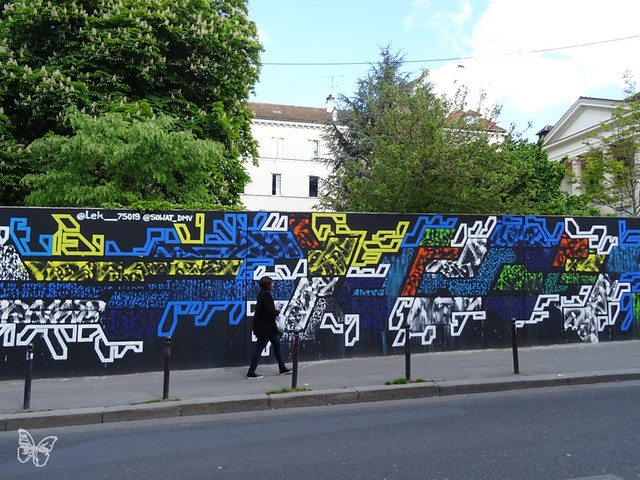 Going up in rue de Ménilmontant (19th), there is an iconic fresco by Jérôme Mesnager : characters form a round and sing to the glory of the musical past of the neighbourhood. Higher up in the same street is the facade of Pavillon Carré de Baudoin which is repainted regularly by renowned artists like Lek & Sowat.

Finally,  you can enjoy a bit of nature while admiring art by wandering through the park of Belleville (20th) where frescoes of street artists such as Seth or Pez adorn walls and pillars.
In the center of Paris, the Halles district to Serge Gainsbourg’s home are the artists’ playground.

On the Igor-Stravinsky Square (4th District) for example, a fresco of 350 square meters shows the enigmatic face of a man inviting silence: a monumental stencil work signed Jef Aerosol .

On the other side of the Seine, Rue de Verneuil (7th),  the house occupied by the singer and poet Serge Gainsbourg is regularly covered with graffiti , drawings, paintings and collages, paying tribute to the musician Since his death in 1991.

Finally if you fancy travelling in the vinicity of Paris, Vitry sur Seine is a town dedicated to Street Art thanks to the artists and local authorities.