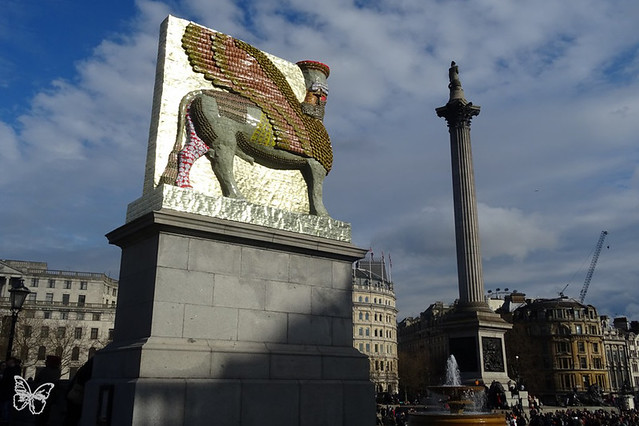 Following David Shrigley ‘ Really Good’ sculpture,  Iraqi-American artist Michael Rakowitz, has been selected to create the latest sculpture for the Fourth Plinth in Trafalgar Square using 9,000 tin cans of date syrup made in Iraq. The artwork is a reconstruction of the lamassu, a winged bull created around 700BC at the Nergal Gate of Ninevah, Iraq, nearMosul vandalised by Isis in 2015.

Michael Rakowitz has built an international art-world reputation over the past 15 years, fusing his autobiography as an American with an Iraqi-Jewish background with social and political observation and activism, as well as the odd absurdist link to pop culture.

During a family visit to the British Museum when he was aged 10, he recalls his first encounter with an Assyrian lamassu, like the winged bull only with a lion’s body. “Suddenly I found myself immersed in this space that was unlike any I had seen before,” Rakowitz recalls, “which was going past those lamassu and going into the throne room reconstruction from Nineveh and seeing the lion hunt of Ashurbanipal.” 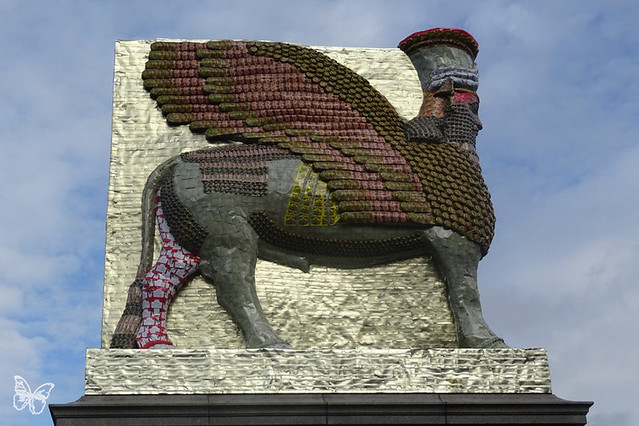 The lamassu on the plinth is not a one-off but part of another long-term project, also called The Invisible Enemy Should Not Exist. For this, Rakowitz is reconstructing the entire database of 7,000 works looted from the National Museum of Iraq in the aftermath of the US and UK’s 2003 invasion. All of the reconstructions are made from Middle Eastern foodstuff packaging and local Arabic newspapers.

The project grew from Rakowitz’s observation that the sack of the museum was the first event of the war about which there was a consensus. “It didn’t matter if you were for the war or against the war, this was a catastrophe,” he explains. “But that outrage about lost artefacts didn’t turn into an outrage about lost lives.”

He noted that many looted artefacts were votive statues. “One of the interpretations of those artefacts is that those were statues that the ancient Babylonians, the Mesopotamians, would bring with them to the temple of the god, and the idea was that you would leave the sanctuary at a certain point but you left that statue in your stead, as a surrogate for you, to continue praying. And when I saw the artefacts being looted, I said, ‘Well, now we have another surrogate: a lost artefact for the lost bodies’. All those things loop back into the human and environmental catastrophe.” 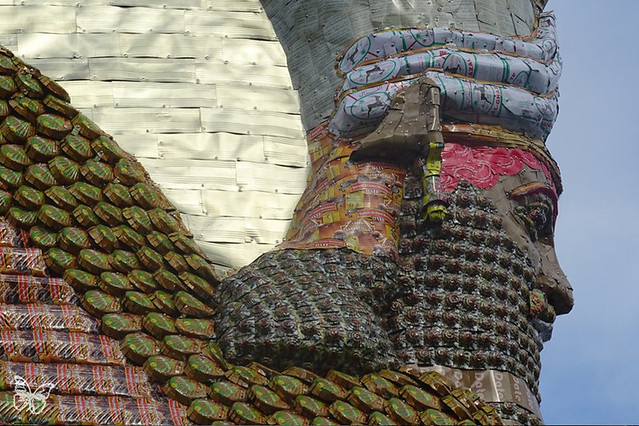 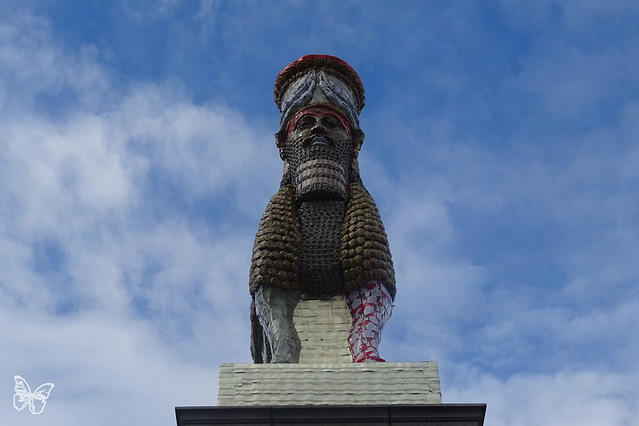 Rakowitz was already thinking about reconstructing the lamassu after seeing the footage of it being destroyed by IS. He had discovered its measurements by referring to the sketches of Austen Henry Lanyard, the British archaeologist who discovered the lamassu and brought two others to the British Museum — the ones Rakowitz had seen as a child. He was invited by the Fourth Plinth organisers to submit a proposal and remarkably, the plinth was the same length as the lamassu — 14ft. “I was like, ‘This is it!’ What else would I do?” 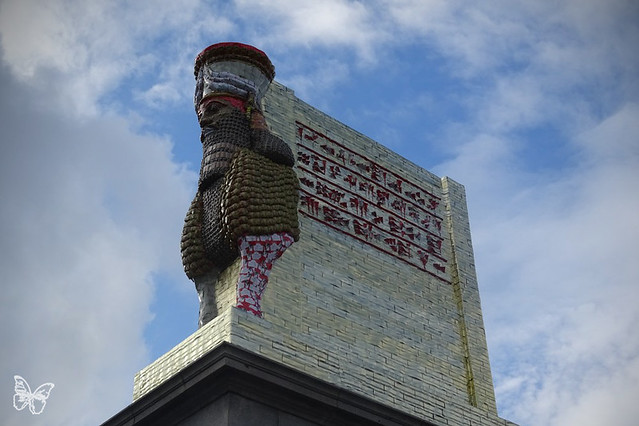 Instead of merely recreating the sculpture, the artist wanted to recreate the DNA of Iraki people who got killed as well, so he decided to use date syrup cans.

So why date syrup cans? Rakowitz first began working with them in a New York project in 2006, Return, in which he reprised his grandfather’s import/export business but attempted to deal only in Iraqi goods. He had found the date syrup in a grocery store in Brooklyn but it was labelled “product of Lebanon”. In fact, the syrup was made in Baghdad, put into large plastic vats, driven to Syria and canned there before moving over the border into Lebanon, where it was labelled and sold globally. That way, sanctions were circumvented and, post-2003, security tariffs avoided. But for Rakowitz the journey was another metaphor, of course: the dates travelled “the same exact path as Iraqi refugees”. 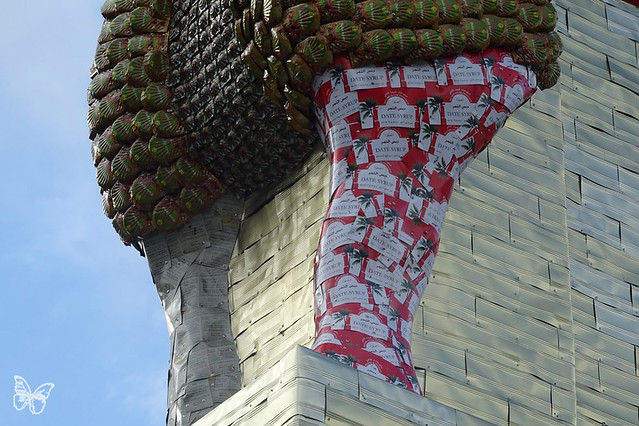 Iraqi dates “were considered the best in the world; what the cigar is to Cuba”, he says. But their demise reflects the tragedy of Iraq’s recent history. Date palm trees disappeared, “from 30 million in the Seventies, when Iraq was the chief exporter of dates in the world, to 16 million at the end of the Iran-Iraq war [1980-88], to three million at the end of the 2003 invasion,” he says. 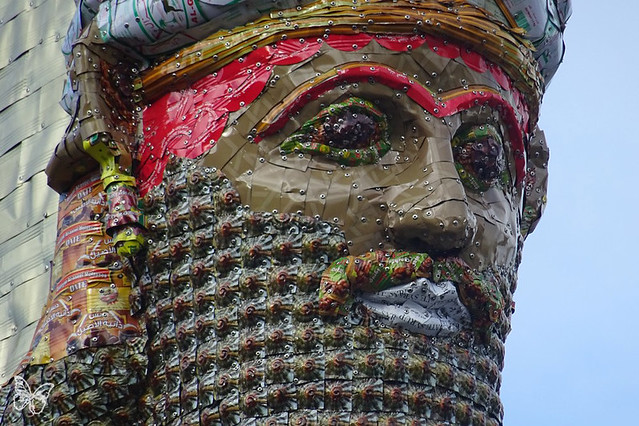 So the plinth sculpture reflects a huge sweep through Iraqi history. “It’s telling the story of a destroyed Iraqi artefact, and what it’s made from is telling the story of a destroyed land, destroyed nature, destroyed ecology,” he says. “And the destruction of a symbol that was so elemental to the Iraqi people. Dates are the harbinger of good things to come: you put a date into the mouth of a baby in some places in Iraq so its first taste of life is sweet. And when you have the erosion of that sweetness, it’s not a good omen.”

This is the genius of Rakowitz’s sculpture: it is history, art history, social history and current affairs. Rich knowledge and impassioned polemic all bundled into a single, glorious yet poignant symbol looking over Trafalgar Square. 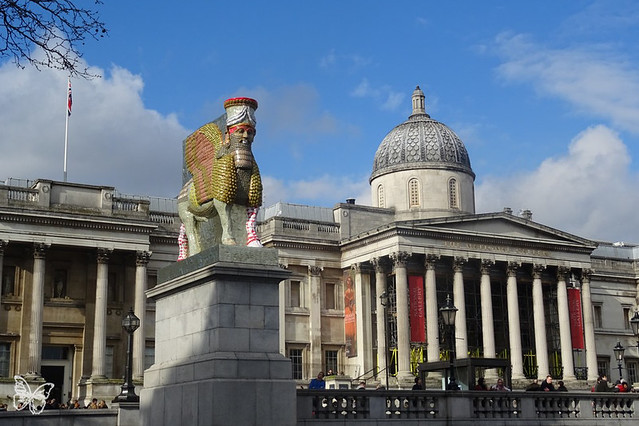