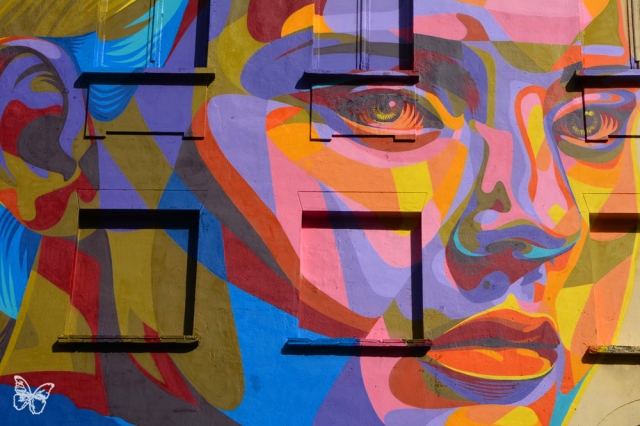 We caught up with Spanish artist Fabio Lopez Gonzalo aka DOURONE as he participates in the 2018 Crystal Ship Festival to learn more about his creative process, his duo with Elodiellol their upcoming projects.

B: Can you tell us more about your background?

D: (Fabio)My background is a boy who lived far away from the center of Madrid and very far from his friends and for that reason he was a long time just drawing. When I was little I used to go to my grandmother’s house, I used to go shopping in the market and I always said “Granny, can we go down the drawing aisle?” That hall was a graffiti spot.

When I understood what that hallway was, I started to paint graffiti and since we did not have a group of graffiti friends we created the STA crew, that’s where all of 1999 started.

After my tour has been very varied, in my family there is a lot of creativity so I was never afraid to try different techniques, tools, etc. all my journey has been an apprenticeship and a self-taught evolution, since unfortunately I was not a very good student and I did not study Fine Arts or anything like that, it was also a very hard and very rewarding journey.

I always knew that I wanted to dedicate myself to something creative.

B: How was the situation towards street art/graffiti / legal and illegal graffiti when you grew up in Madrid?

D: When I started, I did not know very well what graffiti was, I did not listen the street art concept until much later.
My first graffiti was a tag but of 6 meters and the next day I bought a magazine from the store (authentic stiletto) and saw what the 3d was, the power line, a throw-up, a pomp, a wild style, a pastel model … and I also understood the rules of the game, in my time it was like this: a silver or throw-up can step on with a piece, and a piece can be stepped on with a mural, that on the one hand.
On the other side was the seniority and the quality of the work and on the other the level of vandalism of each crew.
When they stepped on you, there were the “fines” that consisted of staying at a place and time you had agreed on before, so that you could return the money or the spays that you had spent on the piece and if you did not pay the fine, you would hit with him, to gain respect based on fear.

Madrid in my time was a pretty tough spot, there were many crews and a lot of urban culture. I also think that there was a lot of respect for the older ones. Legal and illegal, the rule was that graffiti is not for sale. 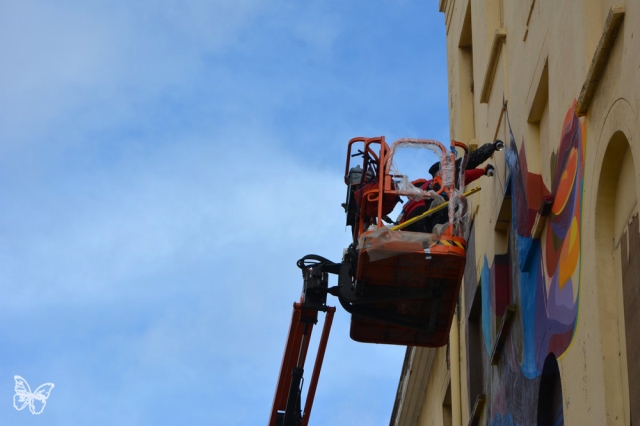 B: Dourone is now an artistic duo, so tell me more about how it started and what is your creative process?

D: This is a nice story since the duo is created from a couple relationship ..
Dourone exists since 1999, when it started in graffiti, and in 2012, Elodiellol and I started our relationship and our professional history together.
We can say that when Dourone really becomes something more serious and professional.
Elodie is the part totally complementary to mine and that’s why I do not call it a duo, I call it 1 + 1 = 3, which means that between the two of us we reach create a third identity without nullifying us as unique.

We have both been learning together and putting everything in its place.

The creative process is the strangest part, I have to create it and put it on a support but I know that this creative process would not be the same if Elodie was not with me in all the conversations and exchanges of support and support in everything that I believe .
When we paint large murals we make them between the two and we get a coordination that works fluid and without errors, based on a lot of time working together.

B: What influenced you to start painting murals?

D: Since I was little I was very interested, so it was a natural process that took me to paint a mural.

In my time the graffiti artists were in the social group where I fit best because I love painting. Painting in public places was normal because graffiti is about that … and painting bigger also for me was a natural process: first you paint in a notebook later on a wall, then a facade of a building and then a tower …
It’s like first a silver, then a piece and finally a mural, for me it was about improving and learning.
When you paint large murals the creative process is much longer and you have a much more intense experience with your mural, and I am still surprised to see a large mural finished, it also has to be said that it is much more sacrificed, tired and sometimes the experience is made too long and it seems that it never ends.

B: What do you like/enjoy about painting in public spaces?

D: At first I liked the adrenaline of painting illegally and that they knew me more in the world of graffiti, then I liked the fact of painting on a wall.
I painted on quiet walls where I could spend many hours painting with my friends a well-worked mural, finally stop making letters to make more illustrations and I realized what it was to paint in a public place with a language that almost everyone understood or it came to influence people in some way.

Based on years of painting I have been accumulating many good experiences and that has been the engine to continue painting. Now it has become part of my life and my work, thanks to that I have been able to travel and meet a lot of people.

B: Your artworks featuring female portraits convey specific messages and values like Respect, Freedom, Trust, Can you tell us more?

D: As you say my female portraits spoke about respect, diversity and freedom. Those three values are very important to me in my life, but as I said, it goes by stages. Now I keep these three values and still learning from them but my work is being simplified and being more complex.
My new work deals with the beauty, composition, color and emotion that it transmits. Now I am very interested in emotions that are difficult to describe, it is a huge world since in each country and each customs has different words that define that emotion (rare)

B: Can you share anecdotal experience from painting a mural in another country? Have you seen any cultural differences through your travels?

D: I have many good and bad experiences but I can tell you two that are excellent.

The first one is from a mural we painted in Paris, and in the weeks they stepped on it with a tag. The tag had disappeared the next week. The next week they step on it with more tags and disappear again: someone was restoring the mural ..
All this story we were seeing through Instragram and we did not understand very well what was happening, so we went to the mural to see it and we realized that it was restored but not by a person who knew how to paint since it was very badly done but the final result was not bad.
The following year we returned to paint the same wall as every year, then a man of about 80 years old appears and tells us that he was expecting us that he liked what we painted a lot. Then he confessed that he liked a lot the previous mural and that he had been taking care of it and restoring it. At that moment we were amazed to know who was the person who had been fixing it because we would never have thought that this man would worry so much for a mural on the street.

And the other story was in France to but in Boulogne-Sur-Mer for their first street art edition festival.
We were painting on a 3 storey building and noticed that an old woman was looking at us from the windows of her house. The next day she came to visit us and bring us some sodas and biscuits without any word. She kept doing that every day until the very last day.
When she saw that we were about to finish it, she came to us and told us that she was living in this house, right in front of the mural we were painting since she was a little girl.
She took our hands and with tears on her eyes she told us:” You know that in this exact place you have your boom lift as you can see, there is a hole between the two buildings. You know why? In 1942, the Germans exploded a bomb right here. I witnessed everything… And now everyday, every time I will look through my window I will see your wonderful and colourful mural. Thank you so much for your present, you cannot imagine what it means to me..” We tried not to cry with her..

And yes of course, there are a lot of cultural differences from one country to another and that is what enrich our experience.

B: What are you creating for the Crystal Ship? Tell us more?

D: What I am creating for the Crystal Ship in an artwork that is based on one of those emotions difficult to describe. OPIA, ambiguous intensity of looking someone in the eye.

B: What are your next projects as well?

D: For this year there are already several closed projects such as the art fair participation in Paris (Urban art fair) a mural in Vannes in France (commission work).
And this year we are invited to participate to the Kaboo Festival in San Diego USA.
Now we are working hard to give us time to do all the projects we want to carry out this year.

This entry was posted in Interviews/ Studio visits and tagged DOURONE, interview. Bookmark the permalink.