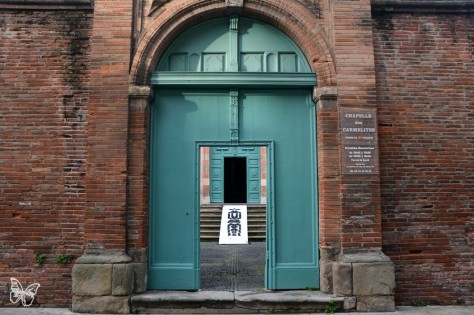 The Mairie de Toulouse and the Centre d’Art Nomade are currently presenting a monumental installation ICAREX-1 by an elusive anonymous artist at the Chapelle des Carmelites until 25 February 2018.

We were lucky to get immersed in the creative process of this secretive artist and followed through the six months building of the installation.

The challenge is to face mystery. In an era where everything is shown, detailed, revealed, the artist protects his anonymity and disappears behind his artistic creations. Always on the move and in search of absolute freedom, the artist remains voluntarily invisible and frees himself from society by changing his identity according to his artistic interventions, but leaves a sign < + + .

Prolific and multidisciplinary, the artist has invaded territories for more than 25 years through different forms and has been playing on several dimensions: the visible and the invisible, the exploration of the light and the darkness, the urban environment, the unauthorised and the institutional, the real and the virtual.

A real master of camouflage, the artist has been secretly pursuing his invasions following a precise satellite cartography: urban territories, institutions, road and motorway network, wind farms, Landart installations on land and water … These ‘Attacks’ are never the result of chance, but instead carefully chosen in a specific timed location, whether in Toulouse (known as the City of Space), Paris, Lichtenstein, Spain, Italy, Kabul , Jerusalem or virtual galaxies.

His totems of light, peaceful entities with stylized geometric forms, mythical beings of another dimension push the public to wonder, get curious, but also to start a treasure hunt to meet them. The public must look for clues, interact with others to find more information, decipher these riddles or simply open the door of the imagination and appreciate the present moment.

A politically engaged artist, his artistic creations also deal with war conflicts, as well as human migration and refugees, such as the collective exhibitions ‘Creve Hivernale’ he curated in Toulouse (covered here) on the emergency situation of refugees coming to Europe.

The historical monument of la Chapelle des Carmelites became an obvious location choice  for the installation because of its intimist dimension.

With ICAREX-1 ,the artist intervenes in echo with the environment: a monumental gilded metal arch mirrors the shape of the golden curved frame of the Annunciation painting, while the vertical golden gates remind of the golden columns of the Chapel.

A mirrored totem floating at nine meters high drops his skin  leaving ashes on the floor.

ICAREX-1 is a reference to pride, the strength and weakness of the human being, the insatiable need to go elsewhere, see otherwise, to go beyond ones current capabilities, to adapt to territories. Through the play of mirrors, the human being is confronted to himself.

The artist thereby continues his work on duality: life / death, the visible / the invisible, light / darkness, the heavenly side / the earthly side.

The chrysalis of latex evokes the process of inner metamorphosis necessary to surpass oneself. It is the death of the ego for a rebirth. The human being tends to go forward to the light, but often makes the mistake of clinging to what he already knows. Yet we must face our fears and go beyond the unknown to find the freedom to create our own life.

The presence of a special warning light that illuminates the installation evokes the urgency of life, the rhythm of life, such as the one from the firefighters on alert to save lives.

The mirrored totem seems to float in the air at nine meters high within open golden gates, like a passage to another universe.

The ICAREX-1 installation specially designed for the Chapelle des Carmelites subtly blends technical prowess and visual poetry. A pure moment of magic and wonder that the artist keeps secret.

Special Thanks to Francoise, Elodie, Sandra, Gat’s, Vince, Hugo, Michel, Manuel, Anne and the Chapell team,  the climbing men and all the support team that made this happen. 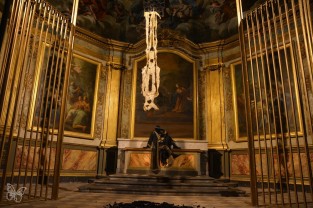