With over ten years in the making, Jellyfish Eyes is the feature film debut by renowned  Japanese multidisciplinary artist Takashi Murakami.

Set in a post-Fukushima world,  the sci-fi fantasy film blends computer-animated graphics with live-action cinematography. The movie tells the story of Masashi, a young boy who moves to a sleepy town in the Japanese countryside with his mother in the wake of a natural disaster. After returning home from his new elementary school one day, Masashi discovers a flying jellyfish-like creature whom he befriends and names Kurage-bo. Masashi soon discovers that all his classmates have similarly magical pets, known as F.R.I.E.N.D.s, which are controlled by electronic devices that the children use to battle one another. Despite their playful appearances, however, these F.R.I.E.N.D.s turn out to be part of a sinister plot that will threaten the entire town. 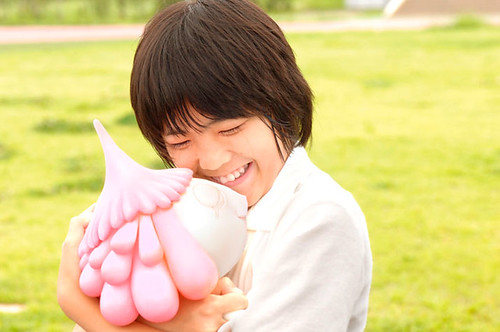 Murakami is currently doing a screening tour of art institutions and cultural venues across the United States. For more info visit  www.jellyfisheyesthemovie.com