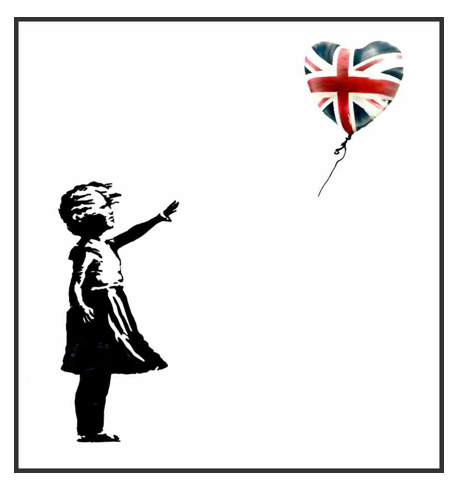 Coinciding with the UK elections, Banksy just announced on his website the free release on 9th June of an exclusive  new print, featuring his iconic Girl with Balloon with the heart being replaced by the UK flag. He hasn’t released any prints since 2010, so this is very exciting news. But there are some conditions.

‘This limited edition artwork on archival quality paper is completely free, but is only available to registered voters in the Bristol North West, Bristol West, North Somerset, Thornbury, Kingswood and Filton constituencies. Simply send in a photo of your ballot paper from polling day showing you voted against the Conservative incumbent and this complimentary gift will be mailed to you.

Lawyer’s note: this print is a souvenir piece of campaign material, it is in no way meant to influence the choices of the electorate, has no monetary value, is for amusement purposes only and is strictly not for re-sale. Terms and conditions to follow, postage not included ‘.

Since the announcement on the website on 3 June, this generated a frenzy of discussions and debate, the role of the artist and political influencing power but also as to whether this was legal or not.  Mentioned on the BBC website, due to the increasing number of complaints to the Somerset Police, an investigation has been launched.

Police said anyone taking part in the offer could also be prosecuted.

A police spokesman said: “We’ve received a number of complaints about an offer of a free Banksy print to people living in six Bristol constituencies in exchange for them voting in a certain way in the forthcoming election and we can confirm we’re investigating the offer. It is a criminal offence under the Representation of the People Act 1983 for any voter to accept or agree to accept a gift or similar in return for voting or refraining from voting. Any person participating in an offer to receive a gift is at risk of being prosecuted.”

As a result on 5 June a message on Banksy’s website is now mentioning a product recall. 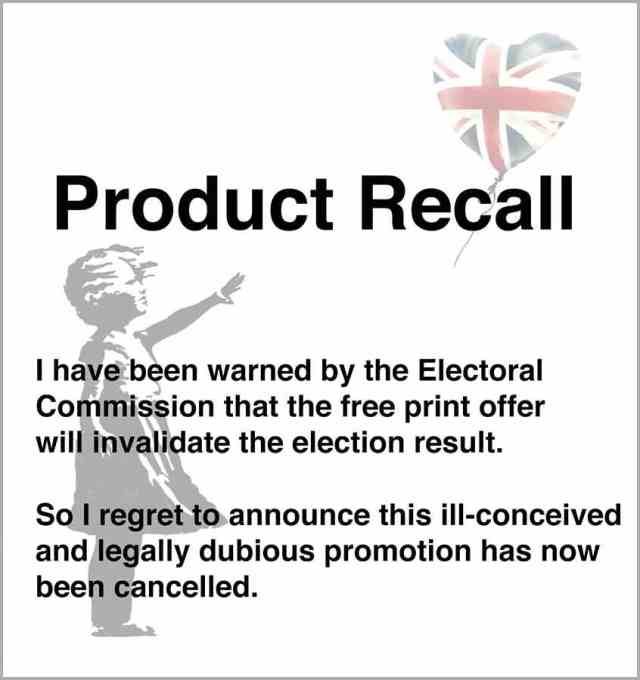