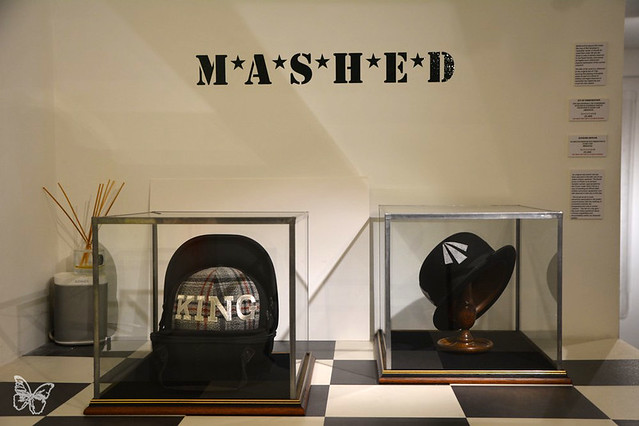 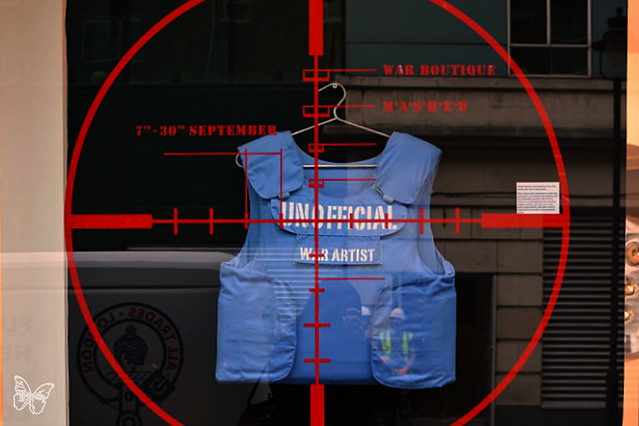 War Boutique’s work conveys strong anti-war messages, exposing the interface between the civil and military spheres, and playing on the parallels between the uniforms and tools of war and the development of mainstream cultural trends and fashions. M*A*S*H*E*D features more than 20 mixed-media pieces by War Boutique, spanning over a decade of his practice, and including his signature bulletproof vests, riot shields and batons.

The top floor of the gallery focusses on ‘military’ themed works, and a ‘civil defence’ theme downstairs, including some of his ‘wearable’ artworks. 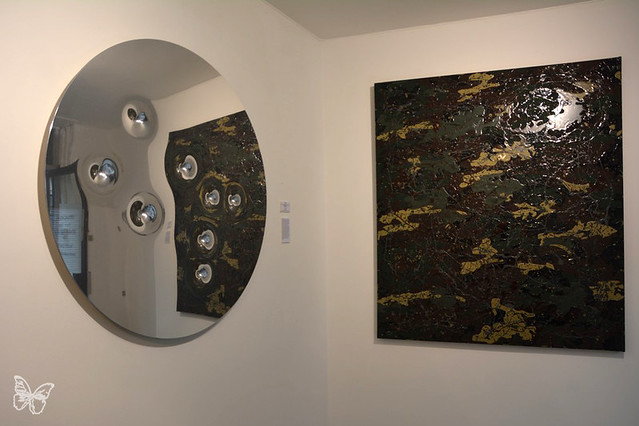 The show debuts his new “Camoufleur” series of large-scale oil paintings on military textiles. These canvases recollect the abstract expressionist movement, with references to the founding of the New York School, Jason Pollock and its initial promotion to the art world through a covert CIA program.  The Camoufleur series explores the interdependencies between war and art from two perspectives: the long history of military intelligence services ‘surprising ‘interventions’ in popular culture; and how artists themselves have been conscripted into war efforts, either consciously or covertly.

The exhibition also features new works from his new ‘Shot-At’ and ‘Blast’ series – subverting the traditions and history of the Action Art movement. The shot-ats are huge reflective metal shields contoured by the impact of 9mm rounds on a firing range. The works echo the patterns of star constellations, also a reminder on how faith and spiritual beliefs play a key role in the soldier’s ability to risk his life. 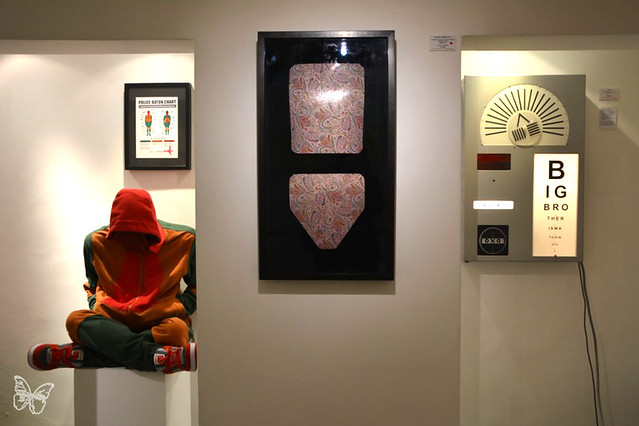 War Boutique commented: “With these new works I wanted to physically manifest some of the real force and impact of modern-day weaponry, and perhaps invoke our collective responsibility and choices around the use and development of such forces”
“My art seeks to address the political and material dimensions of war, and the destructive patterns we are weaving into our cultural fabric”.

For ‘Bomber’, a NYPD jacket looks like a suicide bomber jacket, but on closer inspection instead of dynamite sticks, it has been filled with graffiti pens, suggesting that an alternative approach to change is always possible 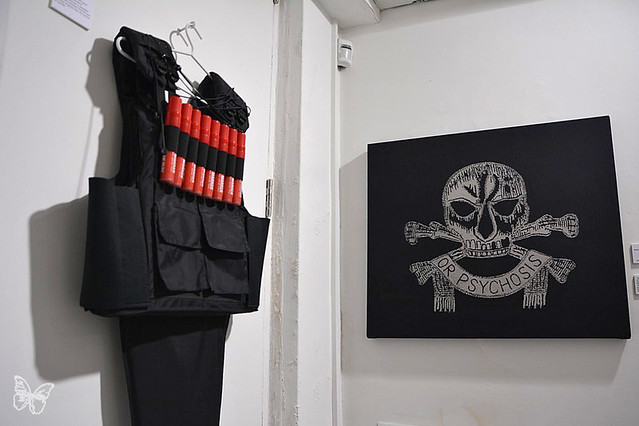 A key piece within the show is ‘Big Game’, a multi-layered textile artwork exploring the history and complexity of the conflict in Afghanistan. The title is taken from the term used to describe the strategic rivalry between Britain and Russia over trade routes through Afghanistan during the 19th century. The military fabrics that make up the letters are a chronological history of combat uniforms worn by British soldiers during the repeated Afghan wars from 1839 to the present day. This striking work is part of War Boutique’s “The Great Game” series, the first of which was acquired by the National Army Museum for its permanent collection in 2014. The Afghan Farsi version – ‘Big Game’ – was first shown at the Dresden Museum as part of the international touring exhibition ‘Caught in the Crossfire’, but M*A*S*H*E*D will be the first time this work has been shown in the UK. 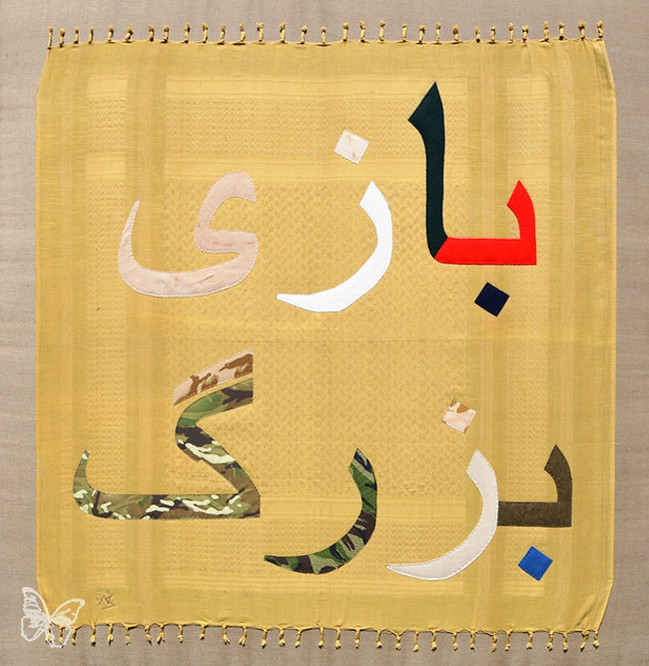 Peacemaker recycles original Police batons, while Filth is a full UK police riot uniform enhanced with S&M paraphernalia, questioning the balance between justified discipline and the abuse of power. 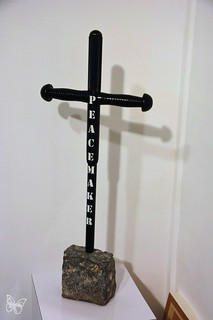 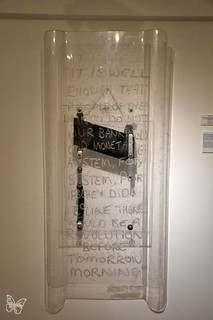 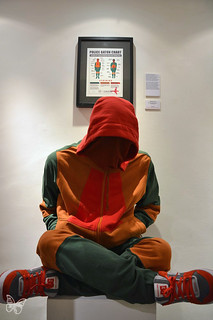 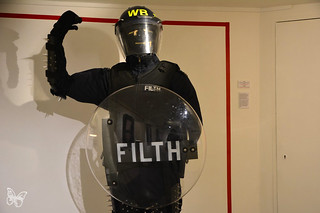 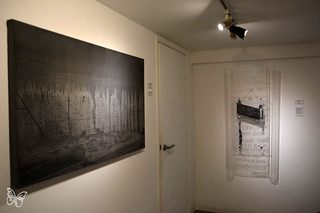 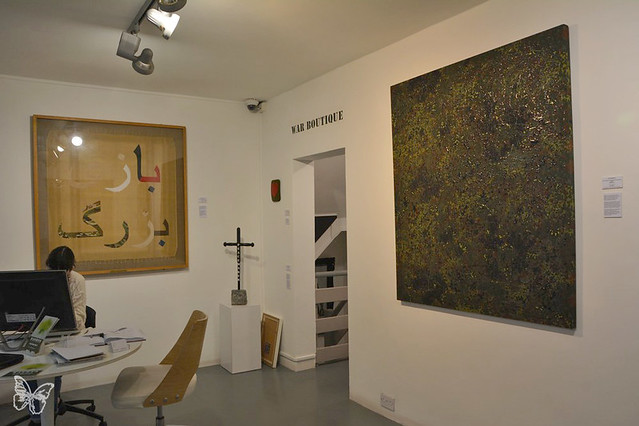 This entry was posted in London, Shows and tagged London, Mashed, War Boutique. Bookmark the permalink.
%d bloggers like this: