Following the 2016 book release Street Art Today, we are pleased to have contributed again to a new version of the book entitled Street Art Today 2 with Björn Van Poucke and Elise Luong by Lannoo Publishers.

The book features introductionary essays, preface and interviews with a wealth of colourful images structuring the most relevant 50 artists in four sections: Abstract, Figurative, Realism and Urban Interventionism.

Artists who serve as an example of what street art is today and will be tomorrow. Over the last few years, we see street art festivals rising up around the world, companies hiring artists to paint billboards in the city and city councils attracting artists to gentrify neighbourhoods. The questions rises: ‘Is street art still street?’. Having escaped the underground scene in many instances, how has it evolved and what is its future?

This Friday, Lonely Planet will release ‘Street Art’, a guide to street art featuring 140 street art hotspots in 42 cities around the world.

To mark the launch of Street Art, the Arnolfini Gallery in Bristol will host a weekend of street art-inspired events, including the UK premiere of Saving Banksy.

From Banksy’s stencils and Invader’s mosaics to amazing murals, this insider’s guide, compiled by independent curator & founder of The Future Tense Ed Bartlett, with a foreword by graffiti artist Remi Rough, provides stunning images along with practical details and maps of where to find secret stashes of street art, and introduces key artists, locations as well as festivals like Nuart (NO), Upfest (UK) or Mural (CA).

“This book is intended as a starting point to your journey,” Ed Bartlett mentions, “highlighting a selection of some of the key cities around the world to experience street art today, and providing guides to each city’s street-art hotspots to enable you to explore further. We’ve also included insights from some of its most important figures.”

Fresh from their return from their one year artistic residency at Villa Medici, Lek & Sowat present their latest book  ‘Underground Does not Exist Anymore‘ together with curator Hugo Vitrani. The book retraces the events between December 2012 and June 2014, where the two artists supported by curator Hugo Vitrani invaded the Palais de Tokyo through various official interventions, secret or ephemeral .

What started out as a mural on a peripheral space of the institution then evolved into an ambitious long-term project. We look back at the project in more details, as we’ve been keeping the secret for a very long time… 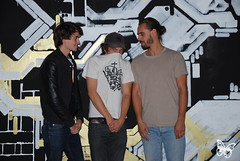 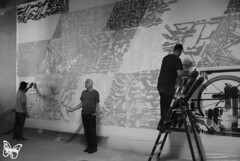 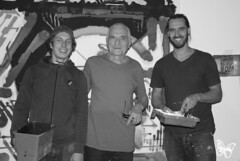 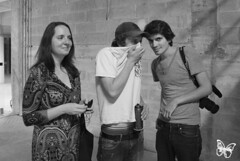 After a first collaboration with the American artist John Giorno ( see more here) Lek and Sowat were invited a second time to the Palais de Tokyo in December 2012 to paint on the walls of an emergency exit overlooking the technical premises of the museum. Rather than acting as a duo on the agreed space, the artists invited a dozen of graffiti artists including Dem189, Sambre, Wxyz, Katre, L’Outsider, Swiz, Rizot, Legz, Seth to join them and created an immersive installation by painting from the floor to the ceiling and began an urban exploration of the building. 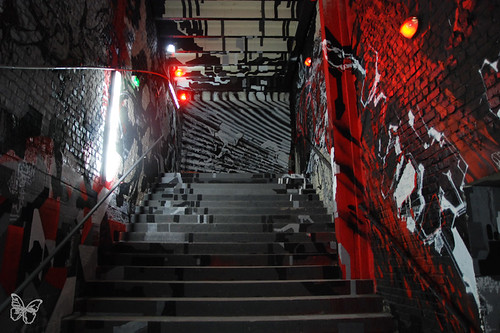 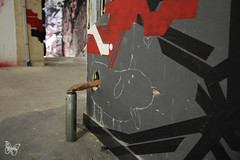 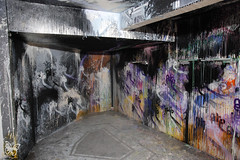 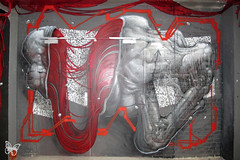 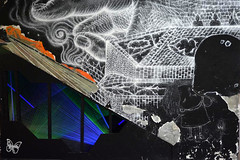 In October 2013 with the complicity of the president of the Palais de Tokyo, Jean de Loisy, new spaces were made available and the project now titled ‘Lasco’ in tribute to the prehistorical cave paintings, the first wall paintings. Curator Hugo Vitrani with Lek and Sowat decided to pay tribute to French graffiti writers with individual dedicated spaces featuring Azyle, Bom.K, dran, Monsieur Qui, ….

In parallel to the authorized areas,  Lek and Sowat as well as invited artists like dran, Alëxone, Kan, Blo, Evol, Cleon Peterson  would also discreetly wander corridors, push doors, paint unofficially and create hidden or ephemeral installations,  illustrating the evanescent nature of graffiti and its ability to penetrate everywhere. 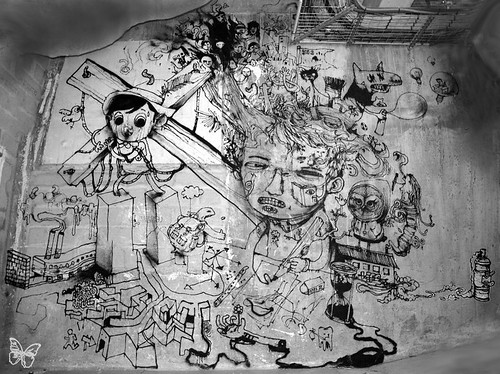 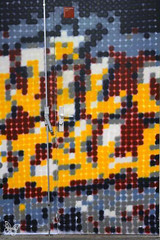 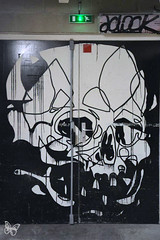 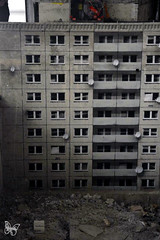 The results can be seen within the video ‘Invisible Vandalism’.

The short feature film Traces Directs is now part of the permanent collections of the Centre George Pompidou.

Pushing their exploration of the building further and further, Lek and Sowat discovered a hatch leading to the ventilation lines underneath the Palais de Tokyo.

This is the epilogue of their artistic journey. Lek and Sowat adorned the narrowed and out of reach spaces with graffiti and with curator Hugo Vitrani invited legendary Mode2 and Futura to paint using ochre, black and white colours, reminiscent of the sacred prehistorical paintings in the Lascaux caves.   Large graffiti letters by Mode2  form the sentence  ‘Underground doesn’t exist anymore’. 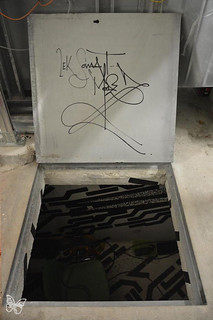 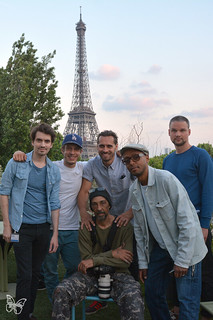 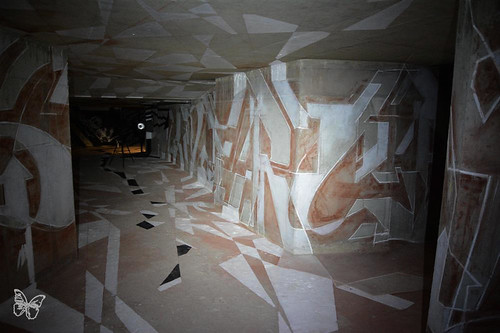 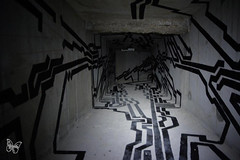 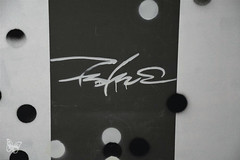 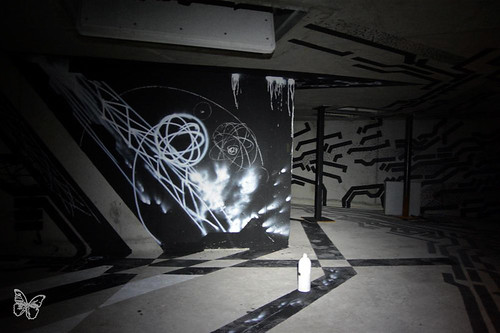 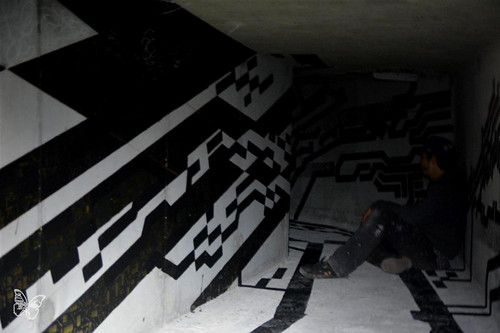 Due to the nature of the space and for security reasons, the Palais de Tokyo has now closed  the access to the hatch permanently. While these paintings will never be accessible to the public, they have been documented in the following video.

We are happy to have collaborated on the upcoming ‘Opus Delits’ #71, a monograph dedicated to the prolific French artist Gris1.

The subtitle ‘ Enjoy your life’ embodies Gris1′ energetic and cheerful artistic approach. For the past 20 years, the artist has been creating colourful  shapes and volumes that breathe happiness and fun, from his signature smileys to post-it notes installations.

The book features 96 pages with pictures of Gris1’s work on trains, murals and gallery installations throughout Paris, London, Toulouse, Melbourne, Berlin as well as his collaborative works with the DMV crew.

Released in stores in March 2017 by Criteres Editions, Gris1 – Opus Delits#71 can be ordered online here. 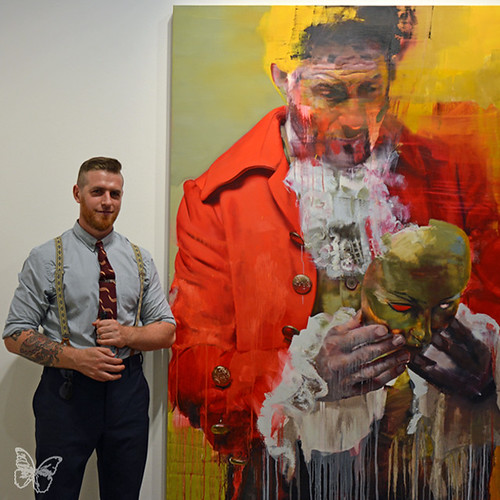 Continuing his narrative of politically charged oil paintings, Conor Harrington depicts fights between military male characters dressed in 18th century uniforms, with all the rage and thirst for power. 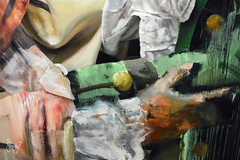 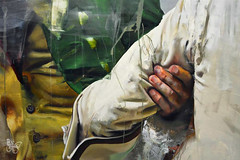 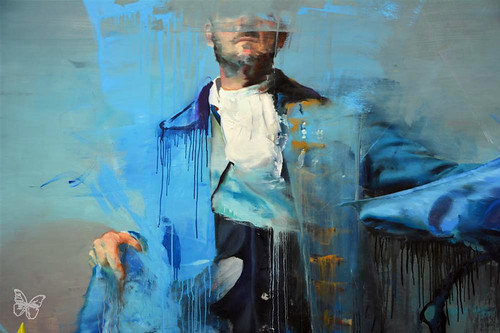 The chase for power is certainly timeless and draws references to the contemporary political climate, as illustrated in Sluggers Paradise (2016), a large diptych featuring a tug of war and coloured to represent the classic blue and red of opposing political parties.

Amongst the eleven new canvases, six of them feature a ‘ Golden Mask’, a recurring theme in Conor Harrington’s body of work, where the portrait explores his alter ego. 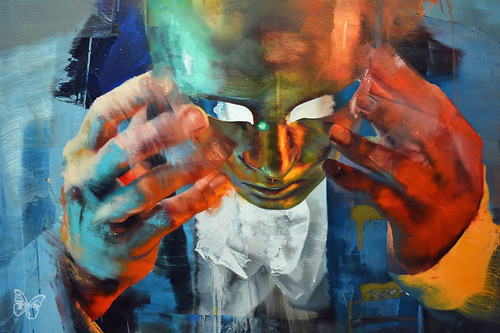 “These paintings are a nod to political deceit, the lies and half truths told to assume a role and gain power, the prevalence of social media selves at the expense of the real self and the graffiti alter ego, acquiring a pseudonym and hiding your true identity.” – Conor Harrington, August 2016.

Guests at the opening were also happy to taste beer with customised labels and browse in advance through the upcoming monograph Conor Harrington: Watch Your Palace Fall by HENI Publishing, a retrospective of Conor Harrington’s painting career. 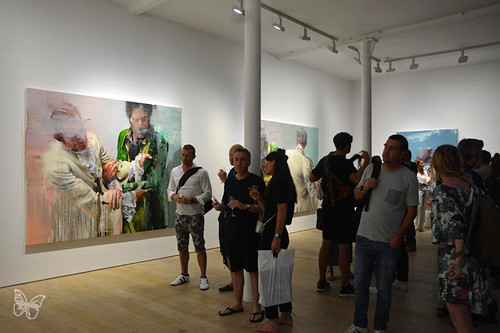 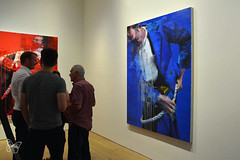 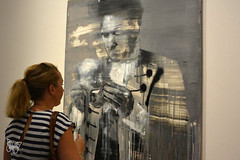 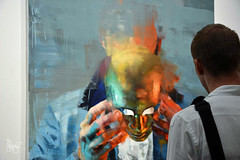 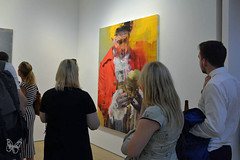