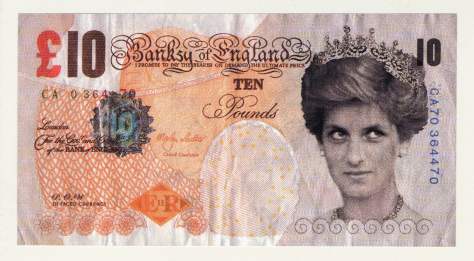 London: Banksy enters the permanent collection of the British Museum

The British Museum in London has acquired its first work by the anonymous artist, a fake £10 banknote depicting Lady Diana, Princess of Wales, which will join its collection of coins, medals and other currency.
The work, entitled Di-faced Tenner, was one of thousands of copies produced by the artist in 2004 as part of a planned art performance. Unlike ‘Peckham Rock’, a fake cave painting on concrete , which was part of a 2005 stunt and loaned again to the museum for a recent exhibition on dissent and protest in 2018 (see our coverage here), the note has been donated to the museum by the artist’s representative Pest Control.

It is the only official banknote ever released by Banksy. Any other kind of currency note are simply NOT by the artist, so fans and buyers beware. And the Banksy Di-Face Tenner indicates on its back ‘Trust No One’.

Palestine: Banksy creates a new artwork at the Walled Off Hotel 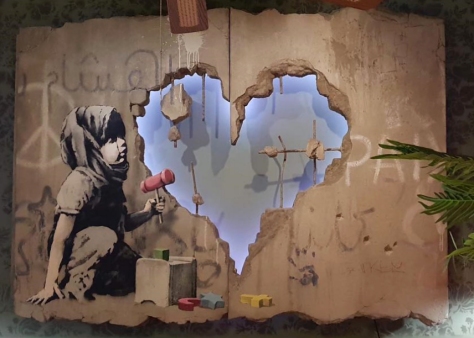 Two years after the official opening his artivist hotel in Bethlehem, Banksy just revealed a new artwork inside the Walled Off Hotel.

Conveying a message of Love and Peace, the artwork depicts a little veiled girl playing with coloured 3d block shapes looking at a giant heart shaped hole in a concrete wall which shows a neon light blue sky. Looking closer the 3D block shapes on the floor are iconographic symbols of all monotheist religions, from the cross to the start and crescent. Messages of peace are graffitied on the wall while Banksy’s signature is engraved in the concrete. 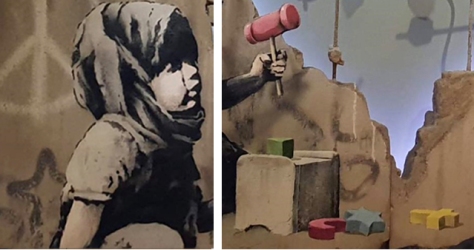 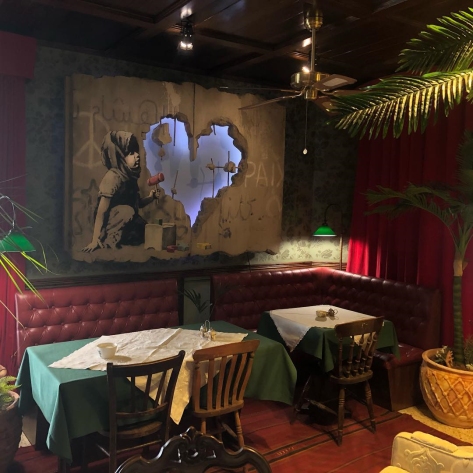 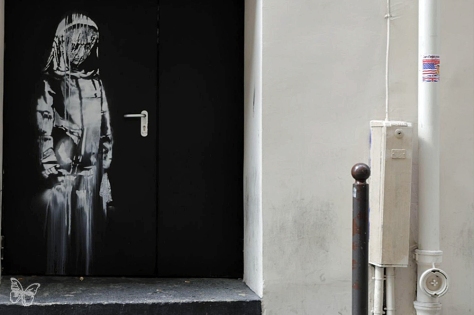 Sadly less than seven months after Banksy painted his tribute on the fire-exit door of the Bataclan theatre, where Islamist militants killed 90 people three years ago, the artwork has been stolen, the venue has said.
The work, one of a series of murals during Banksy’s invasion of the French capital last June, showed a veiled female figure in a mournful pose. ( Check our initial coverage about the artwork  here)
“We are today filled with a deep sense of indignation. The work of Banksy, a symbol of contemplation belonging to all – residents, Parisians and citizens of the world – has been taken from us,” the Bataclan said in a Twitter post. A police investigation continues. 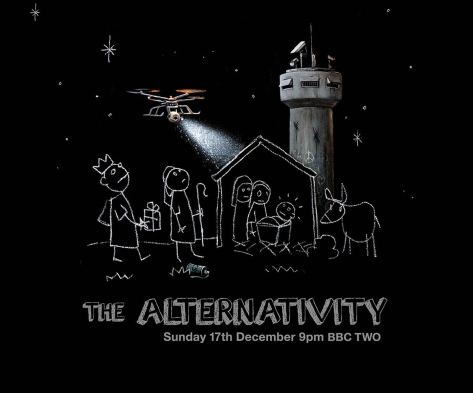 Following the reveal of two new street pieces earlier in Bethlehem (covered here) Banksy will be premiering  The Alternativity film on BBC Two this Sunday, the 17th of December,  an unique observational arts and documentary film directed by Danny Boyle.

This hour-long film follows director Danny Boyle on his travels to Bethlehem to capture a festive performance of the nativity, directed in collaboration between the Oscar-winning director and the local theater director, performance artist, actress and teacher at Bethlehem University, Riham Isaac.

The film premiere was announced with a new artwork from Banksy that mixes his commonly used chalk doodle style with more elaborate stencil and hand painted elements. In this particular case, the characters are doodled as simple stickmen figures, with obvious emphasis put on the drone hoovering above, one of the separation wall towers “watching” over them, and a can of CS tear gas, commonly used by the Israeli forces, laying in front of the stable. The image is a hint on the theme of the play and the movie, which places the story of nativity in the context of modern day Bethlehem, described by Banksy as “the least Christmassy place on earth.”

In advance of the screening, a short teaser presents the movie:

How do you stage a nativity in the car park of a Bethlehem hotel? And, more importantly, how do you make it snow? #TheAlternativity pic.twitter.com/DWbe6NIHKD

Also coming out this week end, an interview in the Financial Times where Banksy discusses about his many travels to Palestine and involvement in Bethlehem. 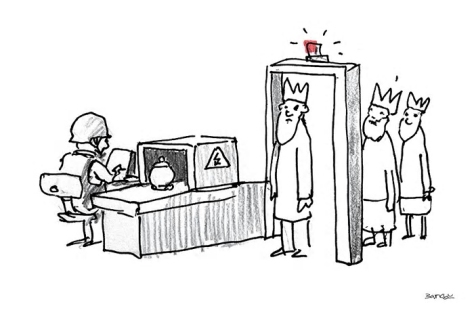 When asked by Financial Times Art Director Jan Dalley about the possible effectiveness of his art, Banksy mentions “There aren’t many situations where a street artist is much use,” he says. “Most of my politics is for display purposes only. But in Palestine there’s a slim chance the art could have something useful to add — anything that appeals to young people, specifically young Israelis, can only help.” 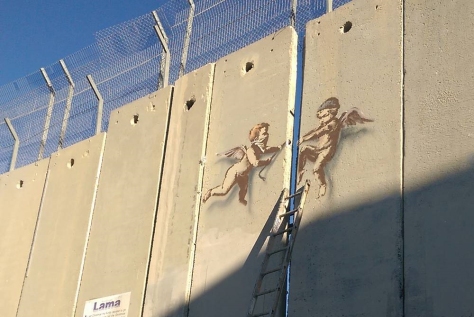 Elusive artist Banksy is back at his “Walled Off Hotel” in the city of Bethlehem in Palestine with a new stunt to celebrate the festive season with a “festive spectacular” titled Alternativity, and continue to raise media awareness in one of the most troubled parts of the globe. Alternativity features a play directed by Rihaam Issac and Danny Boyle and other surprises.

As a nod to the biblical events, two versions of the Alternativity flyer feature a heavily pregnant Mary sitting on a donkey while Joseph is looking perplexed at the separation wall while the star is shining on the other side. How do they cross? 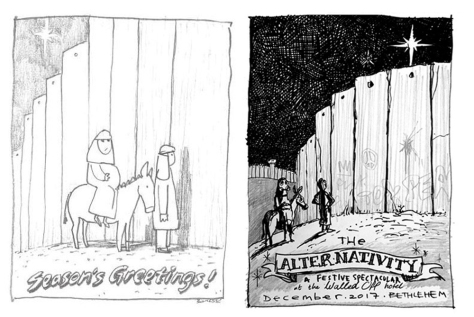 The first piece “Peace On Earth” is a text based work which reads “Peace on Earth *terms and conditions apply.” Located in front of the Milk Grotto Church. The clever text-based works juxtaposes the spiritual and universal ‘Peace on earth’ quote and religious Christmas Star with a consumerism message ‘Terms and conditions apply’, highlighting the sarcastic turn of our modern day society.

It also references to the delicate balance to maintain peace. 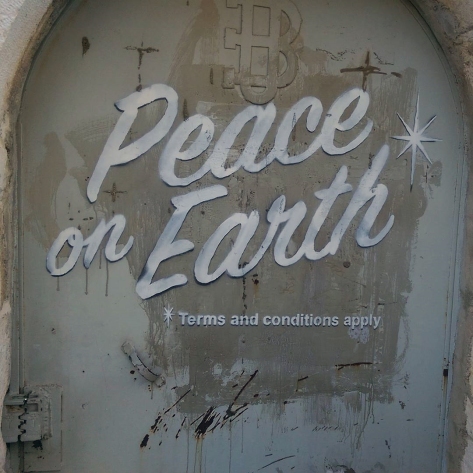 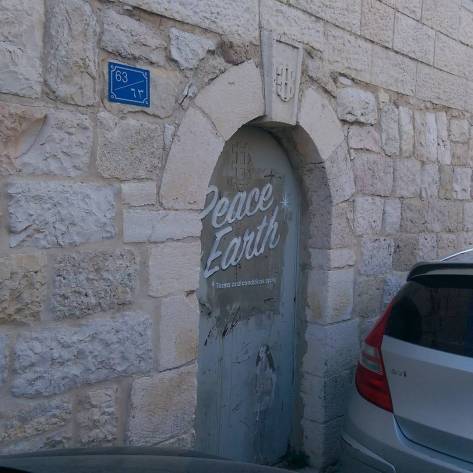 The second piece shows two stencilled angels, equipped with a crowbar and trying to breakthrough the separation wall. One of the angels is wearing a handkerchief to cover his face while the other has a little beanie in true vandal style to carry out their mischief. As usual with Banksy, its a perfect placement for this cute and cheeky artwork. 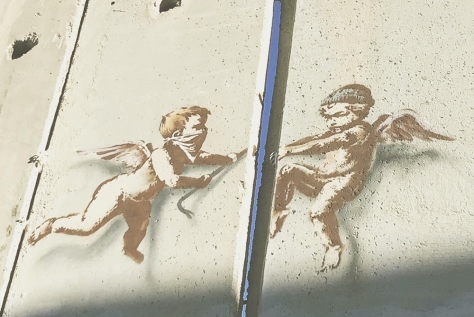 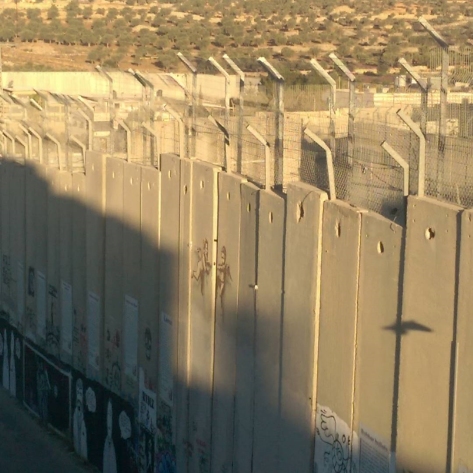 The piece was supposedly painted a few days / weeks ago and hidden in plain sight with a banner announcing the event. 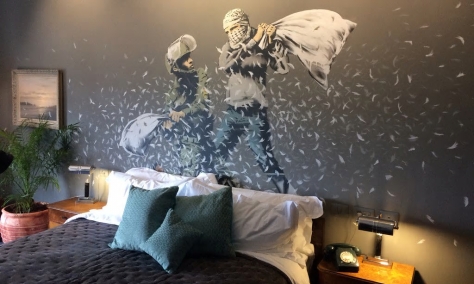 10 years after his first initiative in Bethlehem, elusive British artist Banksy has returned to unveiled his latest project: The Walled Off Hotel , with 10 rooms nestled against the controversial barrier wall separating Israel from the Palestinian territories.

Located in the historic city, the hotel with its nine rooms for £30 a night and one presidential suite, will be open for bookings on its website later this month. It’s a real business adventure, aiming to bring jobs and tourists to a town whose pilgrim and sightseeing-based economy has been ravaged by ever tighter Israeli controls on travel between Israeli and Palestinian territories.

There have been few reasons for Israelis to visit Bethlehem in recent years, because they are banned by law from visiting the town and all its main tourist sites.

It contains dozens of Banksy works, a themed bar and interactive exhibits.  One depicts the signing of the Balfour Declaration which set the conditions for the establishment of Israel 100 years ago this year. 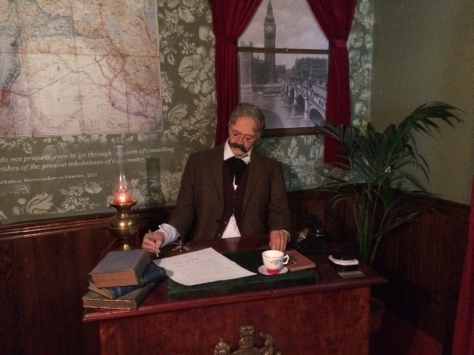 The hotel has been “decorated to resemble an English gentlemen’s club from colonial times” in recognition of the historical role Britain played in the region.

Banksy says people from all sides of the Middle East conflict are welcome to stay, and he is not affiliated to any political party or pressure group.

From the 11th March the museum and art gallery will be open to non-residents every day. Guests can peruse a collection of Banksy artworks that include vandalised oil paintings and statues choking on tear gas fumes. The gallery space enjoys complete autonomy from the rest of the hotel and is curated by the venerated historian and critic Ismal Duddera. He has assembled a permanent collection of real heft and significance. Many of the most notable Palestinian artists from the past 20 years are here – including Sliman Mansour with his iconic “And the Convoy Keeps Going”. An adjoining space is dedicated to temporary shows by upcoming artists.

The museum is dedicated solely to the biography of the wall. It contains state-of-the-art audio visual presentations and a very old tree. Other highlights includes an animated history of the region, military pornography and original beach sculpture from Gaza. The cinema plays excerpts from the mighty Oscar nominated ‘Five Broken Cameras’ – and one of those very same bullet-damaged cameras is on display.
Curated in association with Dr Gavin Grindon from Essex University the museum contains almost fully fact-checked material and will be an ongoing repository for local stories, artefacts and testimonies.

The Hotel also features a graffiti supplies store called ‘Wall – Mart’ that will launch on 20th March, providing supplies for clients who want to paint the Wall nearby. 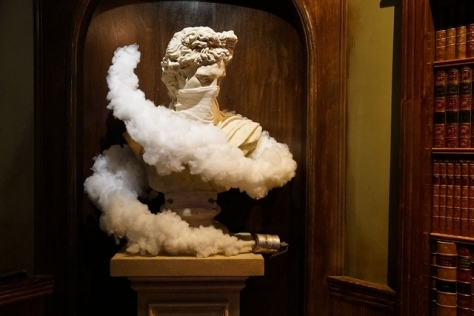 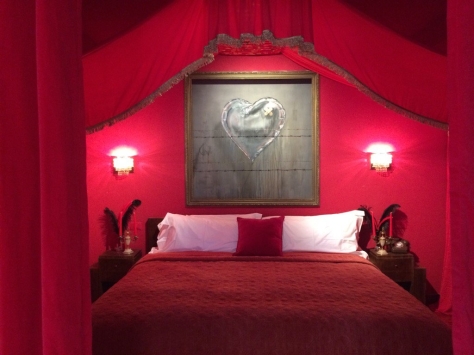 Photo credit: The Guardian / The Walled Off Hotel