Aboard “Le Venin”, the French graffiti crew Da Mental Vaporz crossed oceans and snow storms for a spectacular show at Rtist Gallery in Melbourne.  The top floor of the gallery has been totally transformed with a massive installation. The tunnel shaped space hosts a life size version of the raft ‘Le Venin’, while on the side a treasure chest reveals a multitude of gold and silver objects like spray cans, tools, toys, drinks.

Inside the cabin, viewers can enjoy detail shots of the Squatters mural done at Le Palais des Congres in Toulouse last summer, and look at accessories that survived this epic trip. While sharks are swimming around the raft, the dark horizon features a short documentary of “Squatters” directed by Emile Sacre.

A poster of “Squatters” is currently available online at Edition Populaire.

Stay tuned for the part 2 covering the rest of the exhibition. 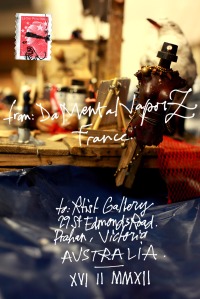