Back in 2012, prolific Parisian artist who has ‘Invaded’ cities around the world took over a new territory by sending a piece into the stratosphere, becoming the first artist to send an artistic creation this far above the earth’s surface.

While preparing his exhibition for the Pulse art fair with Jonathan LeVine Gallery in Miami the artist-activist took advantage of his proximity to the Space Coast, making his first space foray, a project he had long been planning.

On August 20, 2012, the mosaic Space One flew aboard a special device designed by the artist who adapted advanced technologies with his own resources. Equipped with a camera, the weather balloon crossed terrestrial atmospheres for a short stay in space before returning, bringing the premier astronautic work back to Earth along with a series of photographic images showing the mosaic work’s perspective distance from space.

Along the Florida coast adjacent to the NASA launch pad, the mosaic One Space blasted off in August 2012 into the stratosphere, thus becoming the first artwork from Invader to travel in space. The ART4SPACE film documents this eponymous project as the artist invites us to follow him through this artistic expedition and embark into the galaxy.

The documentary movie ART4SPACE was screened only in selected locations like Miami, New York or London up to now.

A year after the launch of SPACE1, Invader continues to conquer space, this time with the help of the European Space Agency (ESA). On July 2014, a new mosaic SPACE2 took off with Ariane 5 towards the International Space Station (ISS). It floated aboard ISS for several months until the arrival of astronaut Samantha Cristoferetti who on arch 2015 installed it inside the Columbus Module.

In an unprecedented world premiere, ballet and guerrilla “street art” collide as US most sought after choreographer Justin Peck and visual artist Shepard Fairey join forces for Heatscape with the Miami City Ballet, an entirely new exploration of movement, music, costuming and art design. The back drop features Obey Giant’s iconography with a mandala and signature colours red / white/ black colours. 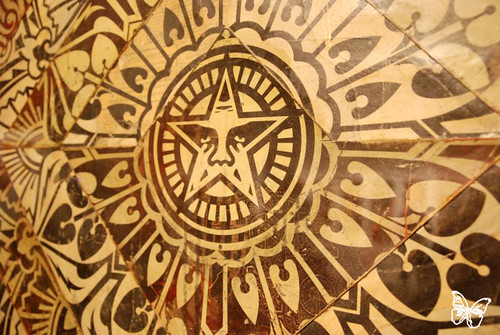 Click HERE to listen to Shepard Fairey and Justin Peck talk with WLRN Miami about the ballet.